World Wetlands Day is observed annually on February 2. The day is to celebrate how wetlands help to maintain biodiversity on Earth. It also marks the anniversary of the signing of the Convention on Wetlands of International Importance (Ramsar Convention) in Iran on February 2, 1971. World Wetlands Day was first celebrated in 1997. Wetlands are created when water meets land. The wetlands in the world include mangroves, peatlands, marshes, rivers, lakes, deltas, floodplains, flooded forests, rice-fields and even coral reefs. There are wetlands in every country and in every climatic zone. Wetlands are important to the environment because they protect our shores from waves, reduce the impact of floods by accepting water during storms and when water levels are high, slowly release water when water levels are low, absorb pollutants and improve the quality of water. Wetlands also provide habitat for animals and plants. Send World Wetlands Day FaveKads to your family and friends to raise awareness about the importance of wetlands in maintaining biodiversity on our planet. 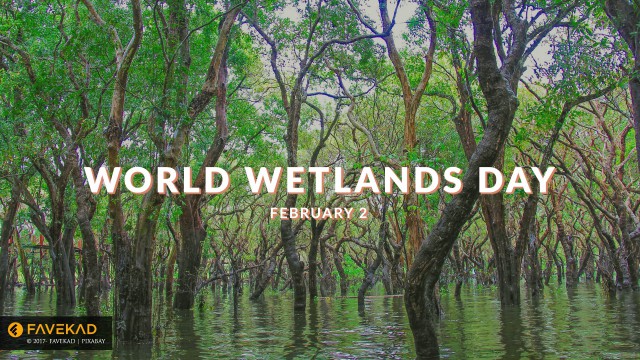