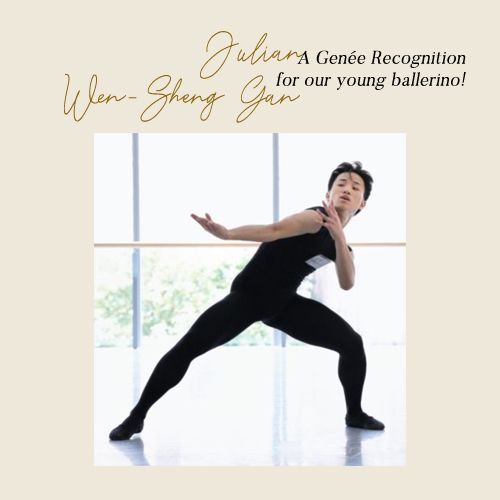 A Genée Recognition for our young ballerino!

On August 29, at the Four Seasons Centre for Performing Arts in Toronto, Canada, our Malaysian teenage ballerino, Julian Wen-Sheng Gan was awarded a silver medal. The Genée International Ballet Competition, organised by the London Royal Academy of Dance attracted 62 of the world’s finest young dancers from 13 different nationalities, aged between 15 and 19 years old and our teenage ballerino was one of them. He did not only win the silver medal but also received the Margot Fonteyn Audience Choice Award. The audience cast their vote for their favourite dancer to win this award via an online polling system on the Royal Academy of Dance website. The award is named after Dame Margot Fonteyn, the Royal Ballet’s legendary prima ballerina. As it is rather rare for a boy in ballet, Julian had to endure bullying and face challenges in school. However, he did not only overcome those challenges but has made a name for himself by winning the silver medal in this prestigious ballet competition. FaveKad congratulates Julian Wen-Sheng Gan on his outstanding achievement.